An increasing number of farmers are opting for floating feeds for fresh and seawater species with improvements in feeding management and zootechnical outcome.

Intake evaluation is one of the most difficult tasks to perform when managing feeds on a fish farm. Depending on the species and number of fish, on the speed of feeders and on the feeder itself, this task may be quite challenging. Traditionally, sinking feeds are preferred by farmers, and this choice implies that feeding activity occurs essentially in the water column. One of the easiest and most used methods of controlling intake is monitoring surface feeding activity, but when sinking feeds are used, this may not be the most efficient method. As there is no surface observation of the feeding behavior and ingestion, the speed of feeding is rarely controlled, and it usually results in feed wastage as it is recognized that fish have a limited rate of intake and will not going to be able to ingest all the feed available. This can ultimately increase the FCR and cause water deterioration and is the major reason to increase pellet size and thus reduce pellet numbers per meal, and the time spent on the feeding. Unfortunately, very few farms acknowledge and control this fact, the rule being to manage a limited amount of time per cage, pond or raceway. Recently, a study released by APROMAR presented evidence that gilthead seabream benefit from eating smaller pellets to later growing stages, increasing the time needed for proper feeding.

Underwater cameras are another method to monitor intake to some degree of precision. However, these are still costly equipment which limits their current use in fish farms. Floating feeds are another solution, not suitable for all production systems, but that can help farm managers greatly improve farms’ zootechnical performance, both in terms of growth and feed conversion.

As a rule of thumb, the feeding behavior of each species determines the density and floatability of the feed used. There are aquatic species that typically eat on the bottom (e.g. shrimp, sole, sturgeon) and those that typically eat on the surface (e.g. carp, mullet). Other species despite being “more bottom- than surface-feeders” are perfectly capable of eating on the surface, if trained to do it. This would include for example seabream, seabass, turbot or salmonids.

The major advantage of fish eating on the surface arises from the possibility of having a higher control on fish intake by the operator, once he is visually controlling fish feeding behavior and response and is able to adjust feeding time, amount, and velocity, ultimately impacting FCR and feed utilization, reducing feed wastage and improving water quality (while lowering rich-organic mud deposition). Furthermore, observing fish eating on the surface also enables the fish farmer to monitor fish health and vigor.

There are however situations where floating feeds are difficult to use or not even feasible. It can be difficult to employ floating feeds in non-protected ponds due to birds’ attack to the feed or when the water current deviates feed from the fish faster than when a sinking feed is used (due to strong surface winds, or centrifugal forces generated by fish swimming activity in sea cages). It will depend on each farm reality, but proper management measures can be implemented to allow this practice (usage of predatory nets and placing feeders windward). Also, due to surface limitations (the ratio surface/volume is very low, compared to ponds or raceways), it is very difficult to use floating feeds in cages. The usage of underwater cameras (or of devices that collect feed in the bottom of the cage) can help in those scenarios.

Being aware of these difficulties, Aquasoja launched floating feeds for intensive inland farms more than 15 years ago. The number of Aquasoja customers now opting for floating feeds for fresh and seawater species has been increasing, with noticeable improvements in feeding management and zootechnical outcome. Most of them are pond or raceway producers due to ease of implementation and low associated cost of this solution. 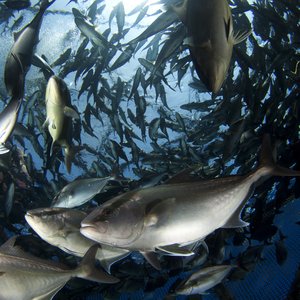 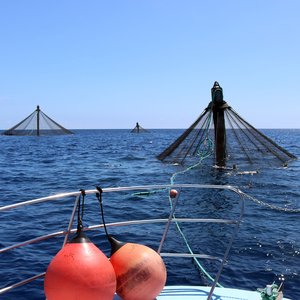