Lumpfish are used by salmon farmers to control sea lice in net pens and they need a complementary diet to supplement the parasites that they take from the salmon. Several studies were performed to develop a suitable lumpfish diet and they suggest that diet is the cause of the development of cataracts that reduce the lumpfish health state.

A group of researchers from Norway, Iceland and the UK compared the effects of these feed types on growth, cataract development and histopathology. Pelleted feed had the highest growth rates but higher cataract prevalence. Researchers found that when lumpfish was fed on feed blocks, growth performance was controlled without apparently compromising the health status of the fish. Lumpfish readily graze from feed blocks and the acclimation period required appeared to be relatively short, thus potentially allowing for their use in commercial salmon cages, researchers said. 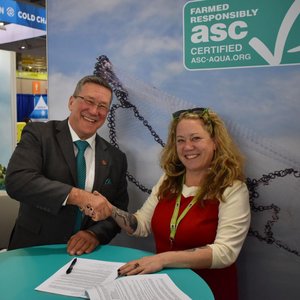