The basis of the Code is the implementation of a control plan encompassing the entire production process, from raw material reception to the manufacturing and delivery to farm of finished products using the HACCP-approach.

Core elements are the control and minimization of carry-over and contamination of raw materials, production and storage facilities including transport vehicles with undesirable substances. The EFMC harmonizes diverging requirements in national codes in a single code.

The compound feed industry is among the first sectors to have produced such a code providing an example for industry “co-regulation” prior to the application date of the new Feed Hygiene Regulation, i.e. on  January 1, 2006.

Prof. Tielen emphasized that ”16 national feed associations and their member companies have committed to producing feed according to the EFMC requirements”. In total “they cover more than 85% of the industrial compound feed production in the EU-25.”

The introduction of the EFMC is a key step for the improvement of feed safety, Prof. Tielen said. Other sectors, in particular at the level of feed ingredient suppliers to the compound feed industry, must follow. The development of a common standard for the production of processed feed ingredients by the International Feed Safety Alliance (IFSA), actively supported by FEFAC, is another important initiative to meet the common objective of producing safe feed for safe food.

The EFMC and IFSA’s International Feed Ingredient Standard (IFIS) can be downloaded from FEFAC’s website www.fefac.org. 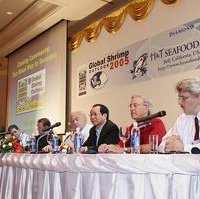