A NIFES research project has shown that a fungicide used on plants may hinder salmon growth.

Analyses carried out by NIFES have shown that Amistar, whose active component is azoxystrobin, can have negative effects on certain cell processes in salmon smolts. Amistar is currently one of the most widely used fungicides in the world.

“We know that azoxystrobin is extremely toxic to fish in both fresh- and seawater, but there has been a lack of studies specifically on salmon,” says NIFES research scientist Pål Olsvik.

The fungicide enters the food chain in rivers and the sea as a result of agricultural run-off. As the use of alternative sources of feed in aquaculture rises, we can also expect that increasing amounts of phytochemical residues will end up in fish feed, which will mean that salmon take up more of them.

Research at NIFES has shown that azoxystrobin affect the expression of specific genes in salmon smolts. NIFES analysed selected genetic markers in 40 muscle and 40 liver samples from salmon smolts that had been exposed to various concentrations of azoxystrobin in their water or in the sea.

“We have found that exposure to azoxystrobin affects mitochondrial respiration within the cells. Among the potential effects of this disturbance is oxidative stress, which can disturb cell division and growth in salmon,” says Olsvik, who emphasises that the effects are not particularly marked, and that so far, only a limited number of genetic markers have been studied.  This means that it is too early to say anything about the effects of the fungicide on salmon, over and above the specific effects already identified by NIFES.

A number of studies have already shown that phytochemicals used by famers to deal with fungi are toxic to a wide range of mammals, fish and other organisms. 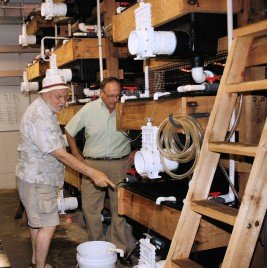 New U.S. shrimp technology could speed up race to feed the world