Louis Dreyfus Company B.V. (LDC) and Guangdong HAID Group Co. Ltd. (HAID) signed a partnership to build a new feed mill in Tianjin, China, to be operated by their joint venture, Tianjin Rongchuan Feed Co. Ltd. Under the partnership agreement signed by the two companies in December 2018, the mill will produce high-end aquatic feeds, including prawn feeds, as well as fermented soybean meal.

The new feed mill is situated on a 53,000 m2 plot of land and strategically located at the center of the Beijing-Tianjin-Hebei economic zone, the site is expected to open by mid-2020, with an annual feed production capacity of 300,000 tons.

“We are very pleased to begin work on LDC’s first aqua feed facility in partnership with HAID – the world’s largest aqua feed producer,” said Margarita Louis-Dreyfus, Chairperson of Louis Dreyfus Holding B.V. “This latest development in China underlines once again the importance we place on partnerships, as we implement our growth strategy.”

“With the increase in aqua product consumption, high-end aquafeed production has become an important part of our growth plans for the coming years,” said Mr. Hua Xue, Chairman of Guangdong HAID Group. “This joint venture with one of the world’s leading merchants and processors of agricultural goods offers an excellent opportunity to contribute to our mutual growth plans.”

LDC said that this initiative is part of their strategy to diversify downstream into more value-added products, as they increasingly integrate along the value chain. China is the world’s largest supplier and consumer of aquafeed. The partnership between LDC and HAID aims to develop the biggest aquafeed mill in North China and leverage the synergies from combining soy crushing and feed production activities in one location.

“As demand for protein rises in a number of markets and consumer demand for healthy meat alternatives grows in China, aquaculture represents an efficient and sustainable source of protein and our move into aqua feeds is consistent with that vision,” said James Zhou, Head of North Asia Region at LDC. 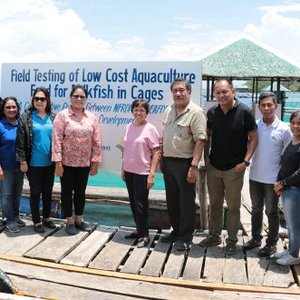