Deep Branch Biotechnology, a UK leading tech start-up, will place a pilot plant within Drax’s Carbon Capture Usage and Storage (CCUS) Incubation Area to extract flue gases to feed microbes which can make single cell proteins for use in aquafeed.

Deep Branch Biotechnology, a leading tech start-up based at Nottingham University, will place a pilot plant within Drax’s Carbon Capture Usage and Storage (CCUS) Incubation Area at its power station in North Yorkshire. It will extract flue gases from the power station’s renewable electricity generation to feed to microbes, which can make single cell proteins for use in fish food and other sustainable animal feeds.

Drax Power Station is the biggest renewable electricity generator in the UK and the largest decarbonization project in Europe having converted two thirds of the plant to use sustainable biomass instead of coal. It is exploring the feasibility of using BECCUS technologies to help further reduce its emissions and contribute towards the UK meeting its climate targets. This is Drax’s first incubation project exploring a market for carbon dioxide.

Peter Rowe, Deep Branch Biotechnology CEO, explained that the method they have developed for producing proteins from CO2, relies on an edible microbe that consumes carbon dioxide. When fed carbon dioxide, the microbes grow and reproduce, enabling them to be continually harvested for protein whilst maintaining a growing culture. Under optimal conditions, up to 70 percent of the material produced is protein. The benefits of this process over other carbon capture technologies is that the CO2 does not need to be separated from the power station’s flue gases before being fed to the microbes.

The Deep Branch pilot will get underway in the fall, when a demonstration plant will be installed within the Drax CCUS Incubation Area. It aims to capture enough CO2 to produce 100 kg of protein to be used to create feedstocks for fish and livestock. The protein generated from the project will be used in a trial project with a major feed producer. If successful, Deep Branch Biotechnology plans to build a larger production facility by 2020 so it can produce several tons of protein per year. 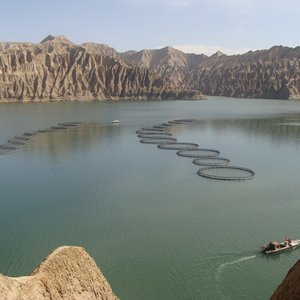