The Pew Environment Group's Antarctic Krill Conservation Project (AKCP) is urging the Commission for the Conservation of Antarctic Marine Living Resources (CCAMLR) to require scientific observers on board all krill fishing vessels and to intensify efforts at data collection to reduce uncertainties when managing this fishery. The AKCP also calls on CCAMLR to conduct a new krill biomass survey and to implement new measures to protect penguins which rely on the species for food.

In a press release issued by Pew ahead of the 29(th) annual CCAMLR meeting, which will begin on October 25 and run to November 5 in Hobart, Tasmania. Pew said the commercial fishery for Antarctic krill threatens Antarctic species such as penguins, whales and seals. Most krill fishing occurs in coastal waters and overlaps with penguin foraging areas, the organization said, adding that the greatest demand today for Antarctic krill comes from the aquaculture industry, which uses it as a component of fish feed.

"Krill catches in the Southern Ocean have doubled in the last three years, already surpassing 200,000 tons in this year alone, and there's no sign of it slowing down," said Gerald Leape, senior officer, Pew Environment Group and director of the AKCP. "CCAMLR must adopt precautionary measures to protect krill and the iconic ocean wildlife that depends on it."

In the past decade, more nations have begun fishing for krill and some have adopted intensive vacuuming technology, resulting in higher catch rates than ever. This combined with the accelerated loss of sea ice, which provides essential krill habitat, threatens to deplete stocks in key feeding areas for penguins, seals and whales. There is a lack of sufficient data about the abundance of krill and krill predator populations to establish appropriate science-based krill catch limits.

"A new krill stock assessment is urgently needed," said Leape. "It's been 10 years since CCAMLR conducted a survey like this. Since then, the krill fishery has undergone extensive changes, not to mention krill are increasingly impacted by global warming."

The AKCP created a photo petition website where people can upload their photo and ask CCAMLR to manage the krill fishery in a way that protects penguins' favorite food. The international photo mosaic has almost 10,000 photographs from individuals around the world who care about better protections for penguins. This mosaic will be delivered next week to delegates from 25 nations when they meet to decide on how to manage the krill fishery. 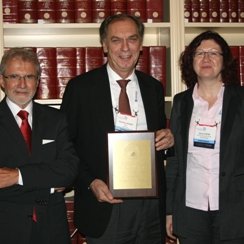