“Norwegian authorities must look to British Columbia and learn from the severe, documented effects that sea lice from the fish farms are having on the migrating wild smolts,”

More than 50 Pure Salmon Campaign partners and global allies sent a letter to King Harald of Norway asking him to help protect wild fish populations from Norwegian-owned salmon farms.  The campaign also invited King Harald to a screening of “Dear Norway” at Aqua Nor.  Norway’s king officially opens this year’s trade show and will be joined by Norway’s fisheries minister, Helga Pedersen as well as the Canadian fisheries minister, Gail Shea.  Aqua Nor runs from August 18 – 21.

“The weight of scientific evidence my colleagues and I have published in peer-reviewed journals shows that sea lice from Norwegian-owned salmon farms are pushing wild pink salmon toward extinction,” said Alexandra Morton, director of the Salmon Coast Field Station.  “I personally invite the King of Norway, together with fellow passionate angler John Fredriksen, to come out to the Broughton Archipelago to bear witness themselves to the poor practices of Marine Harvest, Cermaq and Grieg.”

Despite repeated calls for reform, the Norwegian government – a major shareholder in the aquaculture industry – has yet to take responsibility for its management practices in Canada.

“Norwegian salmon farming companies continue to disregard our peoples’ directives to alter their business practice, to respect our territories and natural resources,” said Chief Bob Chamberlin of the Musgamagw Tsawataineuk Tribal Council.  “This is in direct conflict with the Norwegian government’s support for the UN Declaration on the Rights of Indigenous Peoples.  It is a real shame that such behaviour from Norwegian companies is acceptable and in conflict with international positions made on behalf of all Norwegian citizens."

“It is ironic that the King of Norway is opening the world’s largest farmed salmon trade show in one of only two fjords where wild salmon are fully protected from salmon farms,” said Geir Kjensmo, chairman of the Norwegian Salmon Association.  “In view of the declines in wild salmon and sea trout stocks and rise in sea lice infestation here in Norway, the Laksfjord protection in the Trondheimsfjord and the Tanafjord must be extended to completely cover other fjords.  And the message coming loud and clear from Canada is that wild Pacific salmon must be afforded protection from Norwegian-owned open net cages misplaced on migration corridors.”

“Norwegian authorities must look to British Columbia and learn from the severe, documented effects that sea lice from the fish farms are having on the migrating wild smolts,” said Vegard Heggem, a river owner on the River Orkla near Trondheim.  “Norway should take a leading role to quickly develop and implement the use of closed containment systems like Preline.  This looks like a potential way that salmon can be farmed without destroying the stocks of wild, migrating fish in British Columbia, Norway and other areas where salmon is farmed.”

Other countries also feel the effects of open-net salmon farms.

“In Scotland and Ireland, many of our most iconic stocks of wild sea trout and salmon have been very hard-hit within those areas where Norwegian companies own the majority of the salmon farms,” said Fiona Cameron of the Sea Trout Group in Scotland.  “All of the organizations that have an interest in wild salmonids agree that something must be done urgently to reduce the impact of commercial salmon farming.”

King of Norway Receives Letter Urging Protection for Canada’s Wild Salmon
August 18, 2009
NRK TV aired this story of Don Staniford from the Pure Salmon Campaign presenting Norway’s King Harald with a letter in which he urged Norway to stop the destruction of the Canadian wild salmon during the opening of the Aqua Nor exhibition in Trondheim. 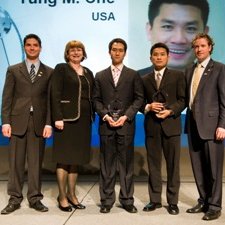