Fatty acid feed supplements for fish may help people get government-recommended amounts of health-enhancing macronutrients, said Paul Brown, a Purdue forestry and natural resources professor. The additive he is testing currently is a type of Omega-6 fatty acid called conjugated linoleic acid (CLA), which researchers have found is a weapon against cancers and diabetes.

"We found by adding CLA to fishes' diets we can get more of these fatty acids into the fishes' tissues than is found in any other animal," said Brown, an aquaculture nutritionist.
"Meat and milk from ruminant animals are good sources of CLA, but these fish retain even higher levels."

Brown's research gains added importance based on a recent National Academy of Sciences Institute of Medicine's recommendation that people increase their consumption of food containing alpha-linoleic acid (an omega-3 fatty acid) and linoleic acid (an omega-6 fatty acid). The institute set the daily requirements, or Dietary Reference Intakes, of these macronutrients necessary to maintain health, and noted that cold-water fish, such as swordfish, tuna and salmon, are prime sources of omega-3.

Omega-3 and omega-6 are essential fatty acids but the human body can't produce them. Fish and shellfish already are good sources of omega-3 fatty acids important for building cells; for brain, nerve and eye function; and for lowering risks of high cholesterol, cardiovascular diseases and cancer.

"Fish have always been the original and standard measure for good sources of omega-3," Brown said. "But now we find that we can introduce other fatty acids into fish. Next we must determine if there is an optimum ratio of omega-3 and omega-6 fatty acids that is healthy."

The American Heart Association recommends at least two servings each week of omega-3-rich fatty fish. A serving should be 3 ounces cooked, about the size of a deck of cards. In one study, senior citizens who ate one serving weekly had a 44 percent lower risk of heart attack, according to the organization.

Special fish diets using additives, such as CLA, and grains, such as soybeans, can be formulated to produce designer fish that are high in beneficial fatty acids, Brown said. The research team is studying different fish species to chronicle their development on specialized diets and determine how much of the nutrients they retain.

Purdue scientists discovered that some fish stay lean while others become much fatter because they retain the lipids, or polyunsaturated fat, from the fatty acids. Two fish models they study have very different activity and metabolism levels, and differ in the amount of fat they retain. Eating a high fatty acid diet in a farm environment turns hybrid striped bass into little butterballs, while yellow perch stay very lean, Brown said.
The ability to raise more nutritional fish of a variety of species should encourage growth of the aquaculture (fish farm) industry, he said. But fish are the last major food item still obtained primarily from the wild.

"The wild fish supply just isn't sufficient to provide us with the amount necessary for human consumption," Brown said. "That was decided in 1989 when we hit maximum sustainable yield from the world's oceans, yet the world population is still increasing.
"We have to develop new aquaculture production that rivals global production of soybeans, pigs and chickens if we want to keep eating fish and shellfish."

Brown estimates that to keep up with demand, annual aquaculture production must increase by 40 mmt to as much as 100 mmt by 2035.

However, the problem of meeting demand isn't just increasing the amount raised on farms, said Brown, who does part of his research as a collaborator in Purdue's Center for Enhancing Foods to Protect Health, which receives support from the Indiana 21st Century Research and Technology Fund. The public also must be educated that aquaculture can produce fish just as good and possibly healthier than those caught in the wild.

"The consumer doesn't know to ask the right questions about fish," he said. "They have the perception that farm-raised fish or shellfish are inferior products and don't have the healthy fatty acids people need. 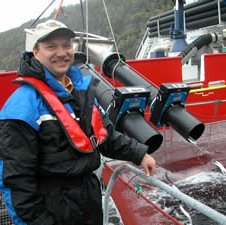