Canada's feed ban is limiting the spread of BSE, according to the findings of the Canadian Food Inspection Agency's feed ban review.

The review was undertaken at the request of Agriculture and Agri-Food Minister Andy Mitchell following the confirmation of two cases of bovine spongiform encephalopathy (BSE) in January 2005. The United States Department of Agriculture (USDA), which conducted its own review, also determined that Canada's feed ban is working as intended.

The Agency's review determined that the ban was appropriately designed-incorporating the best science of the day-and implemented. The review also found that compliance with the feed ban's requirements at rendering facilities and feed mills was high. On average, 95% of feed mills and 93% of renderers inspected over the past three years were either fully compliant or reported only minor non-compliance issues, such as documentation requirements, which do not necessarily signify increased risks of cross-contamination of ruminant feeds with prohibited material. The Agency requires industry to address all cases of non-compliance.

The USDA's review of Canadian feed controls, which was partly conducted in concert with Canadian audit activities, concluded that Canada's feed ban has significantly reduced the potential spread of BSE through the animal feed system. It also determined that the government, the feed industry and producers have taken significant steps together to introduce and integrate the ban into standard feed production and usage practices.

Both reviews indicated that the Canadian feed ban is effectively reducing BSE risks to animal health. The Agency, committed to continuously improving Canada's BSE safeguards, will evaluate the findings of the reviews over the coming months with a view to further elevating compliance levels. As well, the Agency is now reviewing comments submitted on the proposed removal of specified risk material (SRM) from the animal feed system. SRM are tissues that, in infected cattle, contain the BSE agent. This action would diminish the effects of potential cross-contamination of animal feeds that could occur as feed is produced and distributed, as well as any inappropriate on-farm use.

The Agency's feed review report is available at www.inspection.gc.ca

Mushrooms not to be used in feed says PDV 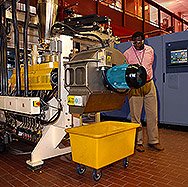