The company completed a commercial-scale trial of a breakthrough shrimp diet that includes no marine resources and has been launched as Ridley Propel range of shrimp diets.

Ridley partnered with Mackay-based Australian Prawn Farms to successfully complete a commercial-scale trial of a breakthrough shrimp diet that includes no marine resources. The feed, made from plant and animal raw materials, includes microbial biomass ingredient called Novacq™. The results from the trial are first in the world. Shrimp grew at the same rate and to the same size as those on a traditional diet containing high levels of fishmeal and oil.

Ridley’s Richard Smullen said the trial results are expected to be a game-changer for the Australian prawn industry. “For more than ten years, we’ve been working to reduce reliance on fishmeals and oils in shrimp feed. This trial demonstrates that with the addition of Novacq™, and some other proprietary ingredients, we can reduce our use of marine resources but still produce the top-quality black tiger shrimp that are so popular on the Aussie barbeque.”

Australian Prawn Farms’ general manager, Matt West, said there was a growing number of shrimp producers that, like Australian Prawn Farms, were fully committed to sustainable production. “Our species of shrimp is difficult to shift to a veggie-based diet like has been done overseas with other species, but the introduction of Novacq™ has provided options to lessen our environmental impact, and meet customer demand for sustainably produced food.”

Novacq™ was developed by CSIRO, and tank-based research, done in conjunction with Ridley, on shrimp which were fed diets containing Novacq™ resulted in a 55% increase in body weight and a 6% improvement in survival rates. “Following the success of the trials in the research tanks, we were keen to put the products to the test in a commercial farm,” said Smullen.

The Australian Prawn Farms trial shows that these newly developed diets containing Novacq™ offer a valuable tool for farmers. In addition to reducing the requirement for marine resources, the diet has lower protein levels resulting in less nitrogen discharge into the environment.

“This is the future for the Australian shrimp industry. It will allow shrimp farmers to meet the increasingly stringent environmental requirements of organizations such as Best Aquaculture Practices (BAP) and the Aquaculture Stewardship Council (ASC) which set the standards for sustainable aquaculture production.” Most importantly, West said, shrimp fed the trial diet had “the flavor we know and love.” Those who taste-tested shrimp fed the traditional diet and shrimp fed the trial diet could not tell the difference. “The inclusion of Novacq™ in shrimp diets will help us and other shrimp growers meet our sustainability goals without impacting production. It’s an important element in our industry’s efforts to grow high-quality shrimp while caring for the environment, now and into the future.” 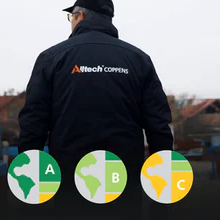