Corbion and BioMar partnered with Norwegian-based Salmon Group to supply feed with a variety of alternative ingredients including Corbion’s AlgaPrime™ DHA.

Corbion and BioMar announced a new feed partnership with the Norwegian-based Salmon Group. The group represents 44 Norwegian fish farmers and 12% of all fish feed sold to salmon and trout farms in Norway.

Salmon Group has a goal of reducing the overall environmental footprint of feed while maintaining feed quality, feed performance and fish welfare. BioMar responded by developing a modified feed that maintains high omega 3 levels (EPA + DHA) , reduces the carbon footprint, and significantly reduces the fish-in, fish-out ratio and contamination of pollutants. BioMar achieved this by using a variety of alternative ingredients including AlgaPrime™ DHA, an algae-based source of long-chain omega-3s. The first farmed salmon fed on the new recipe are expected to reach the market by the end of 2019.

“The leadership shown by Salmon Group is impressive, and we are thrilled to play a part in improving sustainable aquaculture across the globe,” said Marc den Hartog, executive vice president of innovation platforms at Corbion. “AlgaPrime ™ DHA continues to be adopted and trusted by salmon farmers, as they look to improve the omega-3 content and sustainability profile of their salmon.”

The continued expansion of BioMar feed with AlgaPrime™ DHA is the latest in a series of milestones that shows demand for algae-fed salmon among farmers, brands and retailers. To date, BioMar has sold at least 500,000 tons of feed containing AlgaPrime™ DHA over the past three years.

“As demand for sustainable food options is hitting a critical mass, key industry players in food service and retail are increasingly relying on their supply chains to improve their environmental impact,” said Vidar Gunderson, global sustainability director at BioMar. “The use of alternative feed ingredients, such as algae-based omega-3s, is an important part of the effort to address sustainability issues within the salmon industry and beyond.”

Since 2016, Corbion has produced AlgaPrime™ DHA at large industrial scale that is relevant to the needs of the aquaculture industry. Developed to reduce dependency on marine fisheries and provide a new source of long-chain omega-3s for the aquaculture industry, AlgaPrime™DHA is a native, whole algae ingredient that contains approximately three times the level of DHA in fish oil. AlgaPrime™DHA is also a clean ingredient, sustainably produced through fermentation with non-GM cane sugar as a feedstock and a production system powered by renewable energy. 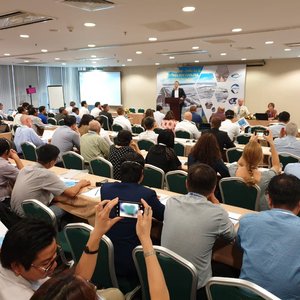