800,000 salmon produced at CAC yielded more fish protein than was used to produce their feed, without reducing the omega-3 level in the fish flesh

800,000 salmon produced at CAC yielded more fish protein than was used to produce their feed, without reducing the omega-3 level in the fish flesh.

Recent research findings from Marine Harvest, Skretting and AKVA group’s Centre for Aquaculture Competence (CAC) in Norway, show commercial salmon farming can be a net fish protein producer. The results from CAC, a large-scale research station where all harvested salmon end up for commercial sale show that limits in the supply of marine raw materials do not need to frustrate future growth in the aquaculture industry, and that salmon farming can produce more fish protein than comes from the wild fish used in the feed.

The objective of the trial, which is currently in progress at CAC, is to fully document the sustainable production of salmon.

“The trials at CAC are a milestone,” said Knut Nesse, Managing Director of Skretting Salmon Feed. “This is the first time we can refer to large-scale trials on fish over an entire generation, where we gain more fish protein in the form of salmon than we use to produce the fish feed. The world’s marine resources must be shared among an ever-growing number of people. In this perspective, the findings open up great opportunities for the aquaculture industry.”

At CAC, the fish are divided into three groups, which are fed separate diets.

It is these two groups that are yielding more fish protein than has been used in production of the feed.

Preliminary figures, from the pens that have been harvested, show that the feed that contains fewest marine resources gives just under 1.2 kg top quality fish protein in the form of salmon per kilogram fish protein used in the feed.

“Final figures will be ready nearer to Christmas when the trial is concluded,” says Olav Breck, R&D Manager in Marine Harvest . “The results are very positive so far. Finding replacements for marine raw materials is a prerequisite for future growth in the salmon industry. At the same time we are engaged in securing the health and welfare of the salmon as these changes are made.” 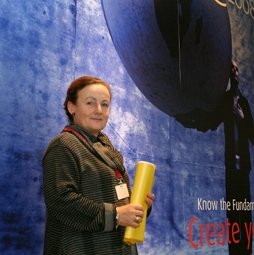