US Organic Aquaculture Recommendations Please No One

Recommendations draw criticism from aquaculture antagonists and from within the industry

US Organic Aquaculture Recommendations Please No One

The outcome of months of deliberation and input from stakeholders aimed at creating standards for organic aquaculture have culminated in outrage from organic and consumer groups and dismay from the industry itself.

At the meeting last week of The Livestock Committee of the National Organic Standards Board (NOSB) recommendations to be made to the National Organic Program of the United States Department of Agriculture (NOP) on the use of fish feed and open net pens in regards to the development of organic aquaculture standards for finfish were disclosed. Neil Anthony Sims, President of Kona Blue Water Farms, the leading open ocean aquaculture company, described them as unattainable and illogical. Others went further.

“They will prevent organic certification for all salmon production, much tilapia, and for all production of cobia, sea bream, sea bass, basa, yellowtail, grouper, and other species that are popular in the marketplace today”, aquaculture consultant George Lockwood told Aquafeed.com.

Lockwood, who chaired the NOSB Aquaculture Working Group (AWG), a group of 12 experienced aquaculture professionals, including seven doctoral level scientists, said the NOSB recommendations required recycling a minimum of 50% of nitrogen and phosphorous generated in the facility, a requirement that preempts many forms of aquaculture other than net pens.

Sims asserted that this is in any case irrelevant for open ocean aquaculture. “Kona Blue grows Kona Kampachi in cages sited in deep ocean water with strong currents, which has proven to have no significant impact on water quality or ocean ecosystems. All of the available evidence suggests that in open ocean aquaculture there is no measurable nutrient loading in the effluent,” said Sims “If there is no impact, then what are we trying to save or preserve here?”

“This is unprecedented in organic agriculture,” Lockwood said. “Oreochromis niloticus is the major tilapia species consumed in the where it is non-native here and in foreign jurisdictions where much of the  supply is farmed. It is native to the and its tributaries in ”. Under this restriction, the only location where tilapia production could be USDA certified organic would be in , he said.

“Prohibiting certification for animals subject to selective breeding is not proscribed in any terrestrial livestock or crop rules. In fact, selective breeding has been practiced for thousands of years and is of critical importance in modern agriculture”, he added.

The revocation of organic status in the event of escapes greater than 0.5% of the cultured stock in containment during a grow-out season exceeds monitoring capabilities with the counting of fish populations, Lockwood said. “The technology of measuring fish populations cannot support such a tight restriction. This provision is unworkable and preemptive. Farmers will not grow aquatic animals to costly organic standards when subjected to revocation due to limits below the threshold of measurability”.

No net pen aquaculture operations of any specie can comply with these requirements, Lockwood told Aquafeed.com. The latter two were never presented for comment by AWG nor for public comment, he asserted.

For some however, the recommendations did not go far enough. The Consumers Union, publisher of the influential Consumer Reports, claimed in a provocatively worded press release that the NOSB recommendations allow open net cages to be used - which  “flush pollution, disease and parasites from open net fish farms directly into the ocean, adversely impacting wild fish supply, sustainability and the health of the oceans”.

They also complained about the standards approved by NOSB that would allow organic fish farmers to use wild fish (which must not come from forage species, such as menhaden) as part of their feed mix provided it did not exceed 25 percent of the total.

“The recommendations would allow fish to be fed “food other than 100% organic feed - the gold standard that must be met by other USDA - certified organic livestock and fishmeal used to feed farmed fish from wild fish - which has the potential to carry mercury and PCBs,” a press release said.
Outside the , practical standards for organic aquaculture have already been achieved.  The International Federation of Organic Agriculture Movements (IFOAM) developed standards in 2005 that have been accepted by 14 global organic standard setting organizations for the organic rearing of aquatic species.

Just next door, in , , the drive for organic production standards for farmed finfish and shellfish was spearheaded by the Pacific Organic Seafood Association (POSA). The discussion around organic fish farming started in 1995 and POSA was formally registered as a society in 2002. Since then, POSA has worked with a number of organic standard setting bodies to draft standards based on those of the International Federation of Organic Agriculture Movements (IFOAM) and the US NOSB. 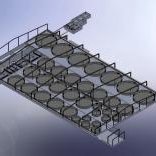