The latest International Service for the Acquisition of Agri-biotech Applications (ISAAA) report on GM production shows the increasing popularity of the cultivation of biotech crops for farmers around the world. As compared to last year, GM plantings increased by 12 % in 2007 and, in some cases, represent up to 90% of total crops.

This upward trend has been recorded for more than 10 years now and shows no sign of stopping. This leads the seed breeding companies to develop ever more new GM events, for cultivation, processing, food and feed uses in the EU’s main supplying countries. The EU is a major importer of raw materials from these countries, particularly of soybeans and soybean products, and feed ingredients from the maize processing industry.

According to DG AGRI, while the GM approval process takes on average 15 months in the , the European authorization process takes over 30 months. These asynchronous approval processes represent a serious threat to the supply of vital sectors of the European food and feed industry, which cannot secure the necessary raw materials for the crushing plants and/or the compound feed units.

The current zero tolerance policy in the EU puts in jeopardy soybean crushing in .

Already in autumn 2008, possible trace level presence of new GM varieties in US soybeans (not yet authorized for import and processing in the EU) will bring the traditional crushing of US soybeans in the EU to a standstill. Soon thereafter, upon cultivation of the new GMO varieties in , if the zero tolerance still applies and the new varieties are not yet authorized in the EU, all soybean meal imports and the crushing of soybeans in the EU will stop with a dramatic impact on all of the EU animal feeding industries.

The EU livestock sector will indeed suffer irreversible damage, with the loss of up to 44% of its poultry and 35% of its pig production according to DG AGRI estimates*. There are no viable alternatives to the import of approximately 35 million tonnes of soybean products as the key vegetable protein component for animal feed.

For this reason the European Grain Traders Association (COCERAL), the EU Oil and Protein Meal Industry (FEDIOL) and the European Feed Manufacturers Federation (FEFAC) urgently call upon the EU and Member States for the establishment of a threshold for the presence of GMOs that have undergone a feed and food safety risk assessment in and outside the EU according to the CODEX GM plant guideline. These industries call on the EU and authorities to safeguard the EU’s crushing and livestock sector by tackling this issue of zero tolerance before it is too late.

What happens to farmed salmon in elevated sea temperatures? 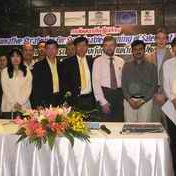