The new EU import restriction [Directive 2002/32/EC of the European Parliament and of the Council of May 7th 2002] related to undesirable substances in animal feeds is gaining ground. A 500ppm Fluorine max level is being imposed on feeding stuffs of animal origin intended for animal feed from August 1st 2003 onwards, which eventually will stop the usage of crustacean [red] meals in aquafeeds.

Prepared for Aquafeed.com by: Dimitri Sclabos K and Raul Toro

The new EU import restriction [Directive 2002/32/EC of the European Parliament and of the Council of May 7th 2002] related to undesirable substances in animal feeds is gaining ground. A 500ppm Fluorine max level is being imposed on feeding stuffs of animal origin intended for animal feed from August 1st 2003 onwards, which eventually will stop the usage of crustacean [red] meals in aquafeeds.

Some of these materials are found in marine origin species, the ones that accumulate such substances in their bones, skin, muscles and organs. Such undesirable substances come from natural origin and/or human-made contamination mainly through wastewater and air pollution.

As Krill meal is also affected, the EU’s Directive shows the limited scientific background used to set such import restrictions.

Antarctic Krill Meal has been used for many years in aquaculture feeds at an inclusion rate found in the vicinity of 4% depending on each species. It is used as a protein, energy and natural pigment carotene source. It also provides growth promoting factors through krill’s properties found through krill’s special amino acids profile and its feeding stimulant effect.

On my previous report “First Report on The Fluorine in the Antarctic Krill meal” I gave the latest Fluorine content information in krill meals based on updated [2003] data received from the South Antarctic krill Fishing grounds. It shows that krill meal have indeed a high Fluorine content though found in a natural organic form. Animals that fed from krill do not incorporate such fluorine in their flesh, rather in their skin, bones and scales. Accordingly, our suggestion was to raise the EU Directive 2002/32/EC level from its proposed 500ppm to a more realistic level close to 2000ppm [dry basis] for krill meals used as a feed ingredient for aquaculture species.

Based on the work done by myself and associate researcher, Mr. Raul Toro, South Antarctic Krill Meal shows a remarkably low content of undesirable substances such as heavy metals and dioxins, closely related to the unpolluted waters where it is captured and processed.

The South Antarctic krill fishing grounds has unique attributes. It has its own natural barriers such as special sea current activity, circumpolar atmospheric winds and a limited human intervention. Industrial contamination is at a minimum level - if any -  which should be kept this way for  years to come, thanks to the latest international treaty agreements that have been set.

The Norwegian Institute of Nutrition [Directorate of Fisheries N-5804 Bergen, Norway] has done extensive research in this topic. It analyzed materials classified as undesirable for animal feeding purposes such as arsenic, fluorine, cadmium, lead and mercury. Through their Norwegian Agricultural Inspection Service, it presented several proposals (Amended proposal, December 2000) to the EU commission in order to change EU’s heavy metal level restrictions for feed ingredients restriction, among them krill meals.

Arsenic (As) from volcanic sources is a natural element found in water, soil and air. In marine species it comes in its organic [80%-99%] non-toxic form, plus its inorganic form, the latter found in an amount of less than 0,01ppm As/Kg wet weight. Fish have 1-10ppm of As/kg wet weight. The EU regulation states 10ppm total Arsenic content for feeding stuffs from fish or other marine animals. In whole krill, Arsenic level reaches 3 ppm As/Kg (Deheyn, D. et al , 2000).

Methyl mercury found in fish feeds is accumulated in fish’s flesh and it is slowly eliminated. Tuna, halibut, sharks, and other predatory species accumulate higher mercury concentrations (0.5 – 1 ppm wet weight). The opposite is valid for species found at the beginning of the food chain, such as Antarctic krill that fed from plankton. It accumulates mercury at less than 0.1 ppm (wet weight).

Dioxins
Dioxins are a group of 210 polychlorinated substances spontaneously created from  industrial contamination and wastewater -  mainly from cellulose plants. From these, 17 are considered toxic and these are targeted in lab analysis.

Dioxins are  a serious toxic material and active at very low dosage; they accumulate in fatty tissue and are not easily eliminated, either in marine species or humans. The EU directive is set at a maximum level for fishmeals of 1.25 ng-WHO-TEQ/kg product.

Since Antarctic krill meals are well within the limit established by the EU, it gives the fish feed manufacturer a greater safety margin, particularly if some of the other fish meals and oil feed ingredients used are closer to the limit.

See also: “First Report on The Fluorine in the Antarctic Krill meal”
“The Krill” 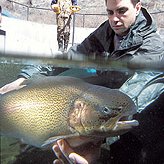 Muscling in on Meatier Trout

First Report on The Fluorine in the Antarctic Krill meal