This paper was presented at the 20th Annual Alltech Symposium in Lexington, Kentucky, USA on May 24-26, 2004.
For the full version of the paper, including tables and references, or for a copy of the full Symposium proceedings please contact Orla McAleer on omcaleer@alltech.com or your local Alltech representative.

The latest review of the state of world aquaculture from the Fisheries and Agriculture Organization (FAO) 2003 and the latest FAO Fishstat Plus statistics from 1950-2001 highlight the continuing growth of aquaculture in contributing to the total fisheries catch.

Aquaculture represented 5.3% of the total fisheries landings in 1970 and this had increased to 34% in 2001, i.e. 48.4 million metric tonnes (mmt) of the total fisheries landings of 142.1 mmt. The value of world aquaculture production is now estimated at 61.5 billion US$. Globally the sector has shown an average annual compounded growth rate (APR) of 8.9% since 1970 compared to 1.4% for capture fisheries and 2.8% for terrestrial farmed meat production.

Finfish production at 24.4 mmt represents 50% of the aquaculture production and over 130 major finfish species are cultured world-wide. These statistics alone emphasize the scale, complexity, rate of development and diversification of the global finfish aquaculture sector.

In 2001, 1.34 mmt of Europe’s 2 mmt was attributed to finfish production and the breakdown of production among fresh, brackish and marine environments is shown in Figure 2. Salmon, trout, sea bass and sea bream account for over 1 mmt or 3 billion US$ in value. Salmon is by far the largest activity accounting for 647 thousand metric tonnes (tmt) and 1.86 billion US$. The marine and diadromous finfish species are valued at nearly 3 times the price of the fresh water species according to global FAO statistics and it is primarily in this area that European aquaculture has focused and developed (Tacon, 2003).
The largest growth is in mariculture with salmon, sea bream, sea bass and turbot. Currently the 15 countries of the European Union produce approximately 50% of the finfish total but that proportion will change with the accession of a further 10 countries later this year. 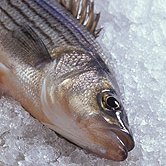