Global Seafood (Frozen, Canned & Fresh) Market to Reach US$371.3 Billion by 2015, according to New Report by Global Industry Analysts, Inc.

Global Seafood (Frozen, Canned & Fresh) Market to Reach US$371.3 Billion by 2015, according to New Report by Global Industry Analysts, Inc.

GIA announces the release of a comprehensive global report on Seafood (Frozen, Canned & Fresh) market. Although currently tempered and moderated by the world economic recession, the global market for Seafood (Frozen, Canned & Fresh) is projected to regain poise, in the medium to long-term, to reach US$371.3 billion by 2015. Factors fingered to drive this growth include growing population, post recession resurgence in consumer affluence, technological improvements in seafood processing, storage, packaging and infrastructure developments for better seafood transportation. Encouraging gains in demand from developing markets such as Asia-Pacific and Latin America also augurs well for the market.

Seafood today is considered as an extremely healthy diet, and a rich source of protein. Innovations in seafood processing, rising health concerns, growing consumer awareness over the importance of healthy diet and improvements in food transportation, have all helped increase global seafood consumption over the years. Aquaculture is one of the fastest growing areas of food production in the world today and has been the driving force behind the growth in the seafood industry. Seafood is one of the most complex categories of food with regulatory changes, economics and weather having a direct impact on the delicate balance of supply and demand and price.

The current recession resulted in rising rates of unemployment, falling disposable incomes, reduction in household wealth, and crumbling consumer confidence. All these have triggered changes in consumer food purchasing and consumption patterns/behavior. Decline in income levels have reduced the spending on groceries, especially meat, poultry, and seafood. Tight liquidity and financial constraints have redefined value and have induced simplicity in lifestyles including food consumption. With one of the inescapable symptoms of the recession being declines in consumer spending and purchasing power, a seismic change in attitude is currently underway with consumers cutting down spending on products including food that are considered as luxury. Types of seafood, which are typically considered as unnecessary luxuries such as, shrimp, oysters, and other exotic species, have taken a hurting fall hereby squeezing revenue in the global Seafood market.

Seafood shopping therefore has been largely altered with consumers reducing the frequency of seafood consumed at restaurants and fast food joints, and resorting to at-home cooking. While the at-home cooking trend has increased the number of trips to supermarkets and convenience stores, retail purchases have also shown shifts towards cheaper products. The market has witnessed rampant substitution of higher priced products/brands with less expensive yet healthy, high quality products. The market also witnessed consumers substitute seafood with other cheaper protein sources. With price becoming a major factor influencing the consumer food consumption trends, seafood has been largely replaced by less expensive alternatives such as chicken or other low-cost protein rich food. With lesser consumer visits to high-end restaurants, demand from restaurants and fast food centers for seafood has witnessed significant erosion. Seafood varieties such as, fresh tuna, sushi and shrimp, which are usually consumed more at restaurants and other food service outlets have especially been the most affected product segments in the seafood market. In addition, rise in seafood prices as a result of accidental marine oil spills, such as, the recent Gulf Coast oil spill, exert pressure on the market.

Although efforts to eat healthy food are currently crushed by financial considerations, the depressing economic factors are not expected to overshadow concerns of health and well being for long, especially in today’s society where emphasis on healthy diet is gaining utmost significance. With the recession now at its tail end and with the green shoots of recovery in the world economy becoming increasingly visible amid the yellow weeds, resurgence in consumer confidence and spending power will push the emphasis back on high-nutrition foods. Fast growing population, rapid technological advancements, such as freezing units that help retain the pristine quality of fish, and infrastructure developments such as establishment of new harbors and airports and expansion of road, highway and railway networks facilitating better trade and distribution of seafood products, is expected to drive the seafood market in the post recession period.

As stated by the new market research report, Asia-Pacific continues to remain the largest and the fastest growing regional market for seafood. Growth in Asia-Pacific is driven by increasing seafood consumption as a result of economic growth, growing income levels, and improving spending power in regional economies, especially China and India. By product, Fresh/Frozen/Chilled Fish market is the largest segment. Shell Fish market remains the fastest growing product segment. 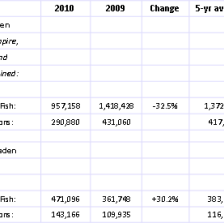