Just like people, fish need their daily quota of vitamins. For instance, one of America’s most popular farmed fish, rainbow trout, need at least a dozen different kinds of vitamins so they can grow normally and stay healthy.

Now, ARS fish nutritionist Rick Barrows has made it easier for trout and other fish to get those vitamins. He’s done that by developing an updated, preblended vitamin mix. It’s a publicly available recipe—technically known as a “formula.” And, it’s already being added to fish feeds that are eagerly gobbled up not just by rainbow trout at fish farms and hatcheries, but also by rare and endangered species being raised in captivity for release into the wild.

This Mix is a Good Match For Today’s Technology

A new, nonproprietary mix, according to Barrows, was needed to replace a decades-old formula that wasn’t adapted to today’s fish-feed processing technology. That technology, known as “extrusion processing,” heats and cooks fish feeds, shaping them into firm pellets that are either sold “as is” or perhaps crushed into smaller bits suited for the tiny mouths of very young fish.

Though extrusion processing has many advantages over previous methods, the heating can damage some vitamins. The formula that Barrows developed takes this into account, compensating appropriately for estimated losses.

He combed scientific journal articles and other published literature from around the globe to find the best available data on these losses, then used that information to determine the best quantity of each affected vitamin to use in the new premixed formula. It’s just one of many steps that went into the 2 years of research and development that resulted in the science-based product dubbed “ARS-702.”

Barrows went public with the formula—which specifies the type and amount of each nutrient—in 2007. Two major manufacturers of vitamins now make the mix which, in turn, has been added by feedmakers to more than 650,000 pounds of fish feeds.

Feedback indicates that the mix has helped invigorate finfish as varied as rainbow trout, walleye, and the endangered Rio Grande silvery minnow.

Barrows, who is with the ARS Small Grains and Potato Germplasm Research Unit, developed the vitamin mix in collaboration with ARS teammate and fish physiologist Gibson Gaylord and Ron Hardy, director of the Aquaculture Research Institute at the University of Idaho.

In creating the new mix, Barrows used nutrient requirements published by the National Research Council—the same federal body that issues nutrient requirements for humans, dogs, horses, and many other forms of life. He gave special attention to myo-inositol, a B-vitamin-like compound. The older formula didn’t include it, because the fishmeal and fish oil that are the mainstay ingredients of traditional fish feeds provide enough of this nutrient. But the plant-derived feeds that Barrows and aquaculturists worldwide are developing need extra myo-inositol. “It’s a comparatively costly nutrient but skimping on it isn’t cost-effective when you’re using plant-based feeds,” Barrows says.

In studies with some 1,400 rainbow trout, Barrows looked at several measures of the mix’s contributions to trout growth and health. The vitamin premix benefited the fish regardless of whether they were eating plant- or fishmeal-based feed, he says.

Barrows, Gaylord, University of Idaho researchers Wendy Sealey and Lucas Porter, and Charlie Smith, formerly with the U.S. Fish and Wildlife Service, detailed their results in a 2008 issue of the journal Aquaculture.

The Future of Fish-Farming: Plant-Based Feeds

The plant-based feed used in the study was derived from corn, wheat, and soy. Why the interest in using plants as a major source of fish feed ingredients, replacing the conventional fishmeal and fish oil?

Plant-based feeds will, according to Barrows, reduce aquaculture’s reliance on ocean-harvested fish such as menhaden or anchovies. For that reason, these feeds are thought to be more sustainable.

What’s more, plant-based feeds sidestep two other problems, namely high levels of contaminants such as PCBs, found in some ocean-going fish, and high levels of phosphorus, inherent in fishmeal. Though it is an essential nutrient, phosphorus can cause water pollution.

The ARS vitamin mix is a notable example of an effort among aquaculture researchers and plant scientists to help producers make the shift from using familiar fishmeal and fish-oil-based feeds to leading-edge, plant-based feeds.

Meanwhile, production of ARS-702—suitable for adding to either future or current feeds—continues. It is being served in ponds, tanks, and raceways around the country. And the fish are indeed biting.—By Marcia Wood, Agricultural Research Service Information Staff.

This research is part of Aquaculture, an ARS national program (#106) described on the World Wide Web at www.nps.ars.usda.gov.

Fish nutritionist Rick Barrows (foreground) uses a vacuum coater to infuse flax oil into pellets of rainbow trout feed containing a vitamin formula that he and colleagues developed. Technician Jason Frost removes feed pellets from a cooling table in preparation for the oil infusion, which further enriches the pellets. 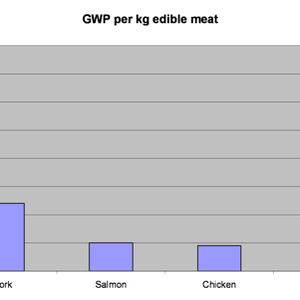