The production of organic salmon in Norway, Ireland and Scotland grew by 43% between 2014 and 2017 linked to the trend for responsibly produced food, according to the latest EUMOFA price structure analysis.

The latest EUMOFA price structure analysis “Fresh organic salmon packed fillets in the EU” focuses on the fast-growing niche market for pre-packed portion fillets of fresh organic Atlantic salmon in the EU with a special focus on four key markets – France, Germany, Ireland and the UK.

Atlantic salmon (Salmo salar) ranks third among the most consumed fish species within the European Union with an overall market estimated about 920,000 tons GWE (Gross Weight Equivalent) in 2017. The EU market is mostly supplied by imports from Northern European countries, mainly Norway, Iceland and the Faroe Islands, however, the EU self-sufficiency rate for salmon was 16% in 2016, with 175,000 tons almost exclusively produced by Scottish and Irish farms.

The report states that linked to the trend for responsibly produced food, the production of organic salmon in Norway, Ireland and Scotland grew by 43% between 2014 and 2017, with Irish production increasing twofold in volume. In 2017, almost all salmon production in Ireland was organic. The analysis shows that the difference in ex-farm price between Norway (low-price), Scotland (medium-price) and Ireland (high-price) leads to different positioning of products. The higher production costs in Ireland induce the marketing of Irish salmon as a premium product, while the competitive price of Norwegian salmon farming allows the sale of organic salmon fillets in discounters.

Ireland, the main EU country in terms of production for organic salmon, ranks third in the EU for salmon consumption with a rate of 4.7 kg per capita in 2017. In the same year, almost half of the organic salmon farmed in Ireland was consumed in the domestic market. The volume exported has increased by 500% since 2012, due to growing demand in the EU market.

France, one of the two biggest markets for salmon products within the EU, is the main importer of Irish salmon. However, consumption has decreased by more than 5,000 tons from 2013 to 2016 to a level of around 21,000 tons in 2017.

The United Kingdom was the second-largest producer of organic salmon in the EU, with Scottish aquaculture production of around 3,000 tons in 2017. The country was also the most significant market for organic fish with consumption growth of +40% between 2013 and 2017. 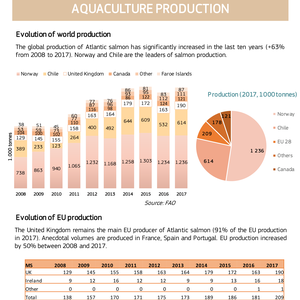 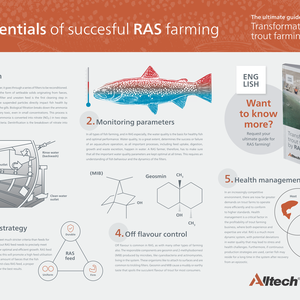