A new study published in the March 30th edition of the prestigious scientific journal Proceedings of the Royal Society B (a publication of the UK’s national academy of science) shows that the transfer of parasitic sea lice from salmon farms to wild salmon populations is much larger and more extensive than previously believed.

This quantitative analysis of parasite transfer is a scientific milestone in a contentious debate. It is the first to isolate and measure the impact of a fish farm on sea lice outbreaks in wild salmon. The study combined new field techniques that allowed comprehensive, individual observations of over 5,500 young wild pink and chum salmon over 60 km of migration route; an enormous data set from months of laborious fieldwork; and state of the art models of disease transfer.

“Our research shows that the impact of a single farm is far reaching,” says lead author Marty Krkosek. “Sea lice production from the farm we studied was four orders of magnitude - 30,000 times - higher than natural. These lice then spread out around the farm. Infection of wild juvenile salmon was 73 times higher than ambient levels near the farm and exceeded ambient levels for 30 kilometers of the wild migration route.”

This increase in sea lice abundance is likely to be damaging for already dwindling wild salmon populations in British Columbia, where the study took place.

In Europe, transfer of parasites is generally accepted as a significant threat to adjacent wild populations – although European studies have not measured the direct transfer of sea lice from farms to wild salmon. However, a bitter debate continues in British Columbia and the Pacific Northwest as to whether salmon farms are contributing to sea lice infections of wild salmon at all.

“Parasites are a key negative side effect of fish farms on the local fish stocks,” says Andrew Dobson, an epidemiologist from Princeton University who researches infectious diseases in wildlife.  “We’re seeing similar effects in Scotland, Norway, and Ireland; in each area parasite amplification on fish farms seems to increase disease levels in the local fish community. However previous studies have not shown nor quantified the direct transmission. This study captures the chain of events.”

“Part of the contentious debate about sea lice is that there hasn’t been this level of precision in the sampling and modeling,” says coauthor Mark Lewis, a mathematical ecologist from the University of Alberta known for his work on West Nile virus and invasive species. “We have worked out the spatial footprint – the data are strong and show that the farms are having a significant impact over a very large area.”

The researchers isolated the effect of the salmon farm by studying the infection levels of migrating juvenile pink and chum salmon as they approached and passed a salmon farm. Within the study area, the salmon farms are anchored in a long thin fjord. Here the wild salmon have no choice but to pass by the farm on their seaward migration.

The scientists developed new, non-lethal sampling techniques that allowed them to examine thousands of the fish for parasites, taking measurements every 2 to 4 km. The fish start in the rivers and head to sea, traveling en masse in large mixed schools. Thus the scientists could see the effect on the salmon as they moved toward the farm. They found that the juvenile salmon carried almost no sea lice prior to the farm but became heavily infected as they approached it.

Unlike other species, pink and chum salmon leave their natal rivers while still much smaller than your baby finger – 3 cm long – and weighing only half a gram. “The youngest fish can be only days old when they encounter a farm,” says Krkosek. “Some of these fish are so young their egg sacks haven’t been fully absorbed – even fish this small are infected.”

The anchored farms, open cages of closely packed salmon, are aquatic feedlots providing the ideal conditions for the breeding and spread of sea lice amongst the adult fish. For the migrating wild salmon, the farm is a concentrated point source of infectious lice larvae.

“We found lice levels exceeded what we would find normally, extending for 30 km – even though the farm is only about 0.2 km long,” says John Volpe, the third coauthor from the University of Victoria. “Conservatively this means that the parasite footprint of the farm is 150 times larger than the farm itself.”

Sea lice can lower the fitness of salmon - and in some cases be lethal - as they create open lesions on the surface of the fish that compromises a fish’s ability to maintain its salt-water balance. When infection rates are high enough, the parasites feed on the fish at rates greater than the fish can feed itself, literally eating the fish alive. Adult salmon can survive sea lice infection, but young salmon are much more vulnerable due to their small size.

Under natural conditions, juvenile pinks and chum do not typically have to contend with sea lice because the adult salmon are far out at sea and are widely dispersed. By the time the migrating pinks and chum normally encounter lice, the juveniles have had the time to put on body mass and build resistance. The location of the farm near the natal rivers undermines this natural coping strategy.

The field study also discovered a new cause for alarm: once the young salmon pass the farm and pick up the sea lice, the migrating school becomes a moving cloud of contagions. Sea lice larvae mature and reproduce on the seaward salmon with each louse producing 300-800 eggs. This second round of lice larvae can re-infect the fish in the school and can spread to other previously unexposed populations coming from geographically disparate regions.

“At about the 30 km mark from the farm, those lice become reproductive,” says Volpe.  “In effect, the farm has exported its lice generating properties – a cyclical event establishing the potential for re-infections up and down the coast. As the abundance of lice increases, we are now realizing that lice will attack other species, not only salmon, but other fish such as herring which are the spark plugs of the entire ecosystems – everything depends on them – from salmon to whales to seabirds. Every commercially important fish is either directly or indirectly dependent on herring.”

“Previous studies have been dismissed by industry, but past studies haven’t looked at such large samples or the spatial aspect,” says fisheries biologist Ransom Myers of the University of Dalhousie. “This study goes far beyond a theoretical model. They tested the model in the real world, using an enormous data set, and saw the same patterns. It is a very thorough analysis.”

“We’ve tried to be very careful and conservative – but there is potential for a major impact on the survivorship of the migrating salmon,” says Lewis.

“The next step is to thoroughly investigate the degree of impact on wild populations,” adds Krkosek.

The authors concur that their findings point to a need to reconsider the premise of industrial scale fish farming in wild salmon habits. “There’s a double bottom line here. The full ecological costs of industrial scale salmon farming must be quantified as well as the economic ones,” says Volpe. "For the migratory runs we studied, there may be very little time left.” 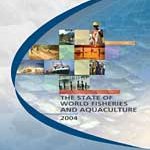 The State of World Fisheries and Aquaculture 2004 [FAO]