How much choline do kingfish need?

Study finds that the existing feeds meet the nutritional needs of juvenile yellowtail kingfish to produce choline, putting the industry on a strong sustainability footing.

Choline is an essential nutrient that is related to the B vitamins. The feeds used in modern aquaculture contain only a small fraction of fish, as the industry tries to reduce environmental impacts and reliance on fisheries.

In a natural setting, yellowtail kingfish would gain all their choline requirements from their diet of fish. Reducing the amount of fish in aquaculture feeds could lead to a deficiency of this nutrient. It is therefore important to know the requirements of kingfish for this nutrient.

Precisely formulating kingfish diets with the right amount of choline ensures that the fish will grow quickly and maintain good health and makes for a profitable industry. The species’ requirements are now better known thanks to a landmark study involving CSIRO staff in a collaborative effort in partnership with NSW Department of Primary Industries and University of NSW PhD candidate Angela Liu, with funding from the Fisheries Research and Development Corporation. The work was published in Aquaculture (Liu et al., 2019. Digestible choline requirement of juvenile yellowtail kingfish (Seriola lalandi)).

CSIRO provided the ability to accurately measure total choline in manufactured feeds and in kingfish tissue as data obtained from commercial laboratories were not satisfactory. Staff at CSIRO’s Aquaculture Nutrition laboratories developed a choline assay based on mass detection by LC-MS/MS rather than more traditional and at times inaccurate colorimetric assays.

The study found that the existing feeds meet the nutritional needs of juvenile yellowtail kingfish to produce choline, putting the industry on a strong sustainability footing. 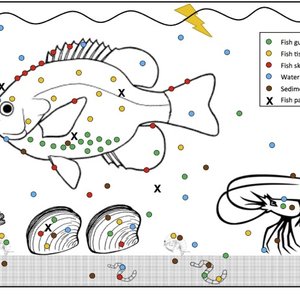 The Pathobiome - a new understanding of disease