Mowi aims for self-sufficiency with their own feed

A new feeding plant is under construction and is expected to produce sufficient feed for Mowi's farms.

The financial performance of Mowi’s feed division was negatively affected in 2018 by strong competition and startup costs for the new project in Scotland. According to its 2018 Annual Report, the financial result was down from 2017.

Mowi established a separate fish feed division in 2012 as fish feed plays a central part in the quality of the final product and is also the largest individual cost component in salmon farming. In 2014, the first feed plant was opened in Bjugn and it produced a record volume of 348,402 tons of feed in 2018. A new feeding plant with a capacity of 170,000 tons is under construction in Kyleakin, on the Island of Skye, Scotland, and is expected to open in the first half of 2019. Mowi Feed supplied salmon feed to all seawater farms in Norway, except the northernmost farms in 2018. The new feed plant will adopt Mowi's standards for sustainable production and aims to produce sufficient feed for Mowi’s farms.

The report states that the company used 0.75 kg of wild fish to produce 1 kg of farm-raised salmon, a similar level as in 2017 (0.73 kg), prioritizing the sourcing of sustainable feed ingredients and striving to utilize feed as efficiently as possible.

The company also has their own strain of salmon, "the Mowi strain," that aims at better feed utilization and growth performance. Mowi is also evaluating some new raw materials including those derived as by- or co-products from other feed, food and even non-food industries such as products derived from insects, alcohol fermentation, CO2 capture and forestry. 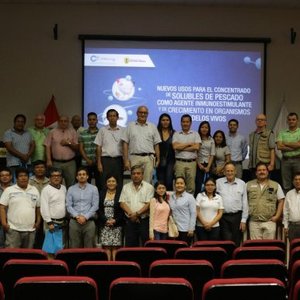