Since the middle of 1980s, the increasing use of feeds has been the main method of increasing production for all the finfish species. Trash fish provide the major feed type for marine finfish culture. Until a few years ago, almost all marine fish farmers used entirely fresh feed, ground or minced, consisting of a variety of marine fish right after catch or in frozen state. Mackerel and jack mackerel were extensively used in fish farms. Sand lance was only used at some fish farms, but in this case the fish is cut into pieces and directly given to fish. Raw fish flesh feed (MP feed) is highly unstable in water causing serious pollution in the water around. Use of raw fish is also highly costly and sometimes its availability is limited. In recent years farmers have been adding compound feeds into their MP feed and the utilization percentage of compound was increasing (Table 1). The inclusion of compound feed, in dry state, was 2% in 1988, and 1993 it was 9% with 91% of raw fish (mostly frozen, in wet state), and now more compound feed is used. Meanwhile, the use of formulated feeds are greatly expanded for freshwater and marine fish species recently.

Practical fish feeds were prepared by the fish farmers themselves until 1981 in Korea. Commercial carp feed was firstly manufactured by Daehan Sugar Co. feed mill under the order of a fish farmer, Horim Fisheries Co., based on a formulation which used ingredients available in the domestic market. In 1982, the company began to produce commercial fish feeds, and thereafter many other companies joined the production of fish feeds. There were 16 registered fish feed manufacturers in Korea producing 56,540 metric tons of fish feeds in 1988, and in 2002 the number of registered fish feed manufacturers was 25 producing a total of 104,484 metric tons of fish feeds(Korea Feed Ingredients Association, 2003).

Moist pellets containing higher amount of compound feed keep much higher water stability. It seems desirable to gradually shift to extruded pellets from the present moist pellets, but with great care if there appears any setback in growth rate of the fish under rearing. If one can use exclusively extruded pellets, the farmers not only help reduce pollution loads with reduced disease outbreak, but also could save the running cost significantly.

Table showing Aquafeed production for different fish species in Korea* for 1993 through 2002. 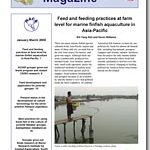